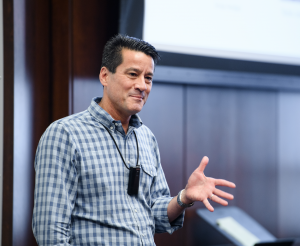 Abstract: Many recent mainstream media articles and popular books have raised alarms over anti-social algorithmic behavior, especially regarding machine learning and artificial intelligence. The concerns include leaks of sensitive personal data by predictive models, algorithmic discrimination as a side-effect of machine learning, and inscrutable decisions made by complex models. While standard and legitimate responses to these phenomena include calls for stronger and better laws and regulations, researchers in machine learning, statistics and related areas are also working on designing better-behaved algorithms. An explosion of recent research in areas such as differential privacy, algorithmic fairness and algorithmic game theory is forging a new science of socially aware algorithm design. I will survey these developments and attempt to place them in a broader societal context. This talk is based on the book The Ethical Algorithm, co-authored with Aaron Roth (Oxford University Press).

About the speaker: Since 2002, Michael Kearns has been a professor in the Computer and Information Science Department at the University of Pennsylvania. He holds the National Center Chair and has secondary appointments in the department of Economics, and in the departments of Statistics and Operations, Information and Decisions (OID) in the Wharton School. He is the Founding Director of the Warren Center for Network and Data Sciences, the faculty founder and former director of Penn Engineering’s Networked and Social Systems Engineering (NETS) Program, and a faculty affiliate in Penn’s Applied Math and Computational Science graduate program. Kearns has worked extensively in quantitative and algorithmic trading on Wall Street (including at Lehman Brothers, Bank of America, and SAC Capital). He often served as an advisor to technology companies and venture capital firms. Kearns is also involved in the seed-stage fund Founder Collective and occasionally invests in early-stage technology startups. Kearns is a member of the Scientific Advisory Board of the Alan Turing Institute, and of the Market Surveillance Advisory Group of FINRA. Kearns is an elected Fellow of the American Academy of Arts and Sciences, the Association for Computing Machinery, the Association for the Advancement of Artificial Intelligence, and the Society for the Advancement of Economic Theory. He spent 1991-2001 in machine learning and AI research at AT&T Bell Labs. During his last four years there, Kearns was the head of the AI department. Before joining the Penn faculty in January 2002, Kearns spent 2001 as CTO of the European venture capital firm Syntek Capital and served as an advisor to various startups, including Yodle, Wealthfront, and Activate Networks. In the past Kearns has served as a member of the Advanced Technology Advisory Council of PJM Interconnection, the Scientific Advisory Board of Opera Solutions, and the Technical Advisory Board of Microsoft Research Cambridge.