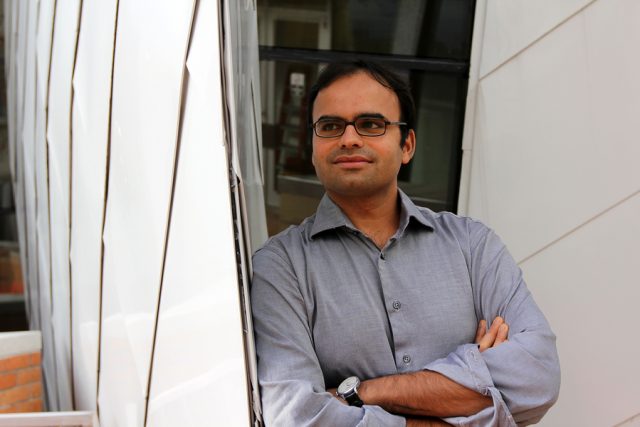 MIT News | March 07, 2022
Professor Devavrat Shah has assumed the role of faculty director of the MIT Deshpande Center for Technological Innovations. He takes over for Professor Tim Swager, who previously held the position since 2014.
–
Article Author
School of Engineering
–
Date Published

Devavrat Shah, the Andrew (1956) and Erna Viterbi Professor in the Department of Electrical Engineering and Computer Science and the Institute for Data, Systems, and Society, has been named faculty director of the MIT Deshpande Center for Technological Innovations. The new role took effect on Feb. 1.

Shah replaces Tim Swager, the John D. MacArthur Professor of Chemistry, who has held the position of faculty director since 2014. Working alongside Executive Director to the Deshpande Center Leon Sandler, Swager helped the Deshpande Center build an inclusive environment where innovation and entrepreneurship could thrive. By examining new models for directing, seeding, and fostering the commercialization of inventions and technology, Swager helped students and faculty breathe life into research, propelling it out of the lab and into the world as successful ventures.

The MIT Deshpande Center for Technological Innovations is an interdepartmental center working to empower MIT’s most talented students and faculty by helping them bring new innovative technologies from the lab to the marketplace in the form of breakthrough products and new companies. Desh Deshpande founded the center with his wife, in 2002.

“Professor Shah’s deep entrepreneurial experience coupled with his research on large complex networks will be tremendous assets to the center,” says Deshpande. “Devavrat is an impactful educator and inspiring mentor who will play a key role in the center’s mission to foster innovation and accelerate the impact of new discoveries.”

Shah joined the Department of Electrical Engineering and Computer Science in 2005. With research focusing on statistical inference and stochastic networks, his research contributions span a variety of areas including resource allocation in communications networks, inference and learning on graphical models, algorithms for social data processing including ranking, recommendations and crowdsourcing, and more recently, causal inference using observational and experimental data.

While Shah’s work spans a range of areas across electrical engineering, computer science, and operations research, they are all tied together with the singular focus on developing algorithmic solutions for practical, challenging problems. He’s also authored two books, one on gossip algorithms in 2006 and the other on prediction methods of nearest neighbors in 2018.

A highly regarded teacher, Shah has been very active in curriculum development — most notably class 6.438 (Algorithms for Inference) and class 6.401 (Introduction to Statistical Data Analysis) — and has taken a leading role in developing educational programs in the statistics and data science at MIT as part of the Statistics and Data Science Center within the Institute for Data, Systems, and Society.

“With his experience and contributions as a researcher, educator, and innovator, I have no doubt that Devavrat will excel as the next faculty director of the Deshpande Center and help usher in the next era of innovation for MIT,” says Anantha P. Chandrakasan, dean of the School of Engineering and Vannevar Bush Professor of Electrical Engineering and Computer Science. “I am grateful to Tim for the tremendous work he has done during his eight years as faculty director of the Deshpande Center. His commitment to building an inclusive environment for innovation and entrepreneurship to thrive was particularly impressive.”

A practiced entrepreneur, Shah co-founded Celect, Inc. — now part of Nike — in 2013, to help retailers accurately predict demand using omnichannel data. In 2019, he helped start IkigaiLabs, where he serves as CTO, with the mission to build self-driving organizations by enabling data-driven operations with human-in-the-loop with the ease of spreadsheet.

Among his many achievements and accolades, Shah was named a Kavli Fellow of the National Academy of Science in 2014 and was just recently announced as an Institute of Electrical and Electronics Engineers (IEEE) Fellow for 2022. He’s also received a number of awards for his papers from INFORMS Applied Probability Society, INFORMS Management Science and Operations Management, NeurIPS, ACM Sigmetrics, and IEEE Infocom. His career prizes include the Erlang Prize from INFORMS Applied Probability Society and the Rising Star Award from ACM Sigmetrics. Shah has also received multiple Test of Time paper awards from ACM Sigmetrics and is recognized as a distinguished alumnus of his alma mater, the Indian Institute of Technology Bombay.

“The Deshpande Center thanks Tim for his years of service as faculty director,” says the center’s executive director, Leon Sandler. “Tim’s commitment to innovation played an integral role in our success, and the center’s programs have thrived under his leadership. I look forward to working with Devavrat in the continuing effort to fulfill the mission of our center.”

As part of his new post, Shah will work closely with Sandler, who has held the executive director position at the Deshpande Center since 2006.

Reprinted with permission of MIT News.